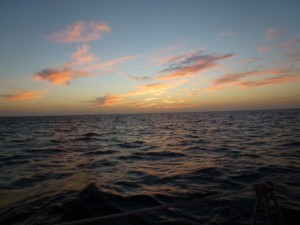 Mile to Mile: Today was a long day so we got up before dawn to leave. We don’t like leaving in the dark but in order to travel more than 50 miles mostly during daylight we would prefer leaving in the dark than going into an unknown harbor in the dark. The weather forecast was the same as last night but it looked promising that the winds would die down and moderate for at least several days which is perfect for our planned three day hop down to Hudson, Florida and Tarpon Springs. After our long, rough crossing, deciding to go back out there is extremely difficult but at some point we just need to go. So go it is.

After a long cautious cruise up the Steinhatchee channel (did we mention everything looks a lot different in the dark than in the daylight), we reached the final marker and turned south. It was breezy with 1-2 foot rollers on our port quarter which made steering a little challenging – especially if you want to stay on course. But a moon was lighting our way, the stars were out and we could see a little glow from Steinhatchee so we felt comfortable continuing on. 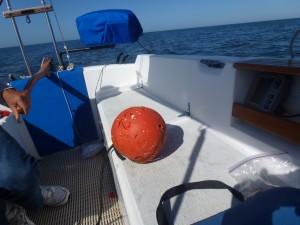 Our biggest problem was watching out for crab floats. This is our first experience with these hazards to navigation (we didn’t see any coming in to Steinhatchee) and they can be anywhere. Usually they are placed in long straight lines following a random compass course placed anywhere from 200 to 400 feet apart. They can be in water anywhere from 8 ft deep to 40 ft deep. They are not reflective and can be any color from white to mottled brown to blue (now that is a stupid color). The floats are attached to the crab pots with poly line which likes to get sucked up in the prop wash and wrap around the prop and shaft. We started seeing the first lines of them soon after heading south. Using the spotlight helped us see them but the choppy conditions made it difficult to spot all of them. We had naively thought that it would be unlikely for one to get caught in our motor – we don’t run very deep and the boat hull would shove the float away before getting to the prop. Of course that theory was shot to hell only about a half hour after leaving the channel. All of a sudden Boris whined and stopped dead. Crap. Now we are adrift, in the dark, sideways to the waves and don’t immediately know what happened. Of course it may have something to do with the 10” orange Styrofoam ball and black poly line wrapped around the prop shaft. Double crap. 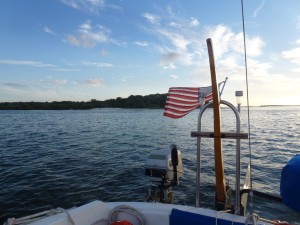 So I lifted up the motor (one advantage we have over a larger cruiser) and, with some creativity and a long reach, cut the crap pot off, unwound the jammed line and got the motor back in the water. Luckily, no permanent damage was done (except to our nerves) and Boris started on the second try. We think he sounds normal but does he? It took hours before we felt confident and all was well again. 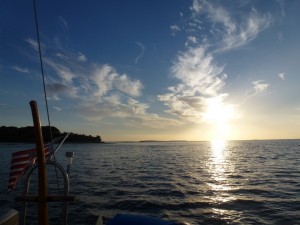 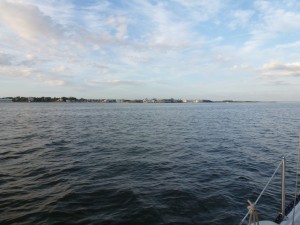 After our early morning adventure the rest of the day was a cakewalk (whatever that is – I guess it just sounds good). After a beautiful sunrise the winds and waves gradually moderated all morning and became almost calm by afternoon. The day actually went quickly – we were kept very busy watching and navigating through, around and past thousands of crab floats. It became a game almost and you definitely could see patterns after a while. The problem was the odd float that was placed in a random sequence or had floated off course. We wanted to sail but decided we had enough things going on not to add another variable. At least the dolphins were having fun. They came by to visit in groups of three to five all day long. Amazing creatures – we never get tired of their visits. 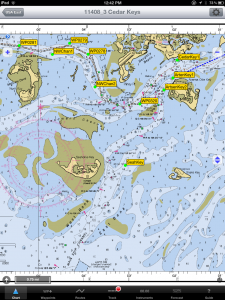 We made good time and arrived at Cedar Key mid afternoon and followed the channel markers to a nice anchorage at the south end of the small archipeligo just east of         . We will head out the back way in the morning saving hours of travel tomorrow. It feels good to be back “home” again. 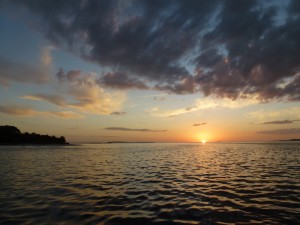