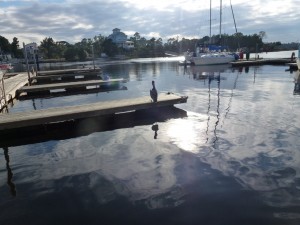 Mile to Mile: After spending yesterday drying out and recouping from our bumpy crossing, we decided have some fun today. Time for an ebleskiver party. We invited outselves to It’ll Be Alright for brunch – we brought the batter for ebelskivers (round danish pancakes), fruit, juice and bacon and we borrowed their stovetop and spacious salon table for our little get together. A wonderful time was had by all. By the time we left, not a single round pancake was left on the plate. 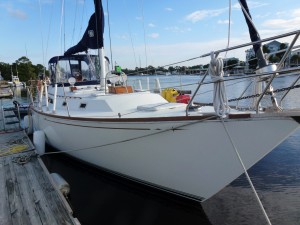 It’ll Be Alright was lucky they decided to stop and anchor outside Steinhatchee. As they were motoring slowly into the marina, they noticed a vibration in their drive system. They remember seeing some pieces of stryofoam floating out in back of their boat just before dark last night but hadn’t noticed anything wrong as they pounded into the waves. In the calm channel, the vibration was very noticeable. They luckily were able to find a diver in the area who could come to look at their shaft and prop. He showed up just before we had brunch and spent a total of 3 minutes underwater diagnosing the problem. He popped up with a long tightly curled chunk of black poly line hooked to a short piece of plastic that used to be stuck through the middle of a foam float. Thankfully, he found and removed the problem – they had run over one of the thousands of crab floats scattered all over the west coast of Florida and snagged the line which wrapped around their prop shaft. It took him much longer to prep his dive equipment and get ready to dive in the murky river water. If they had continued to Tarpon Springs they may have done significant damage to the shaft bearings or may have had to get towed a very long ways to get it removed. They made a very good decision. 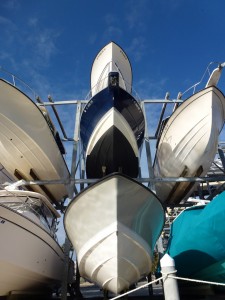 Making a living is a challenge in these Old Florida towns. There aren’t many major manufacturers located this far off the beaten track. People sometimes have multiple jobs or need to be very creative in how they make a living. In addition to the many service jobs, people make a living guiding fisherman out into the Gulf, commercial fishing or shrimping, crabbing, shucking oysters, diving to fix boats and even filleting the thousands of fish caught by sportsman every year. If there is a tough job to do, you can usually find someone skilled and willing to do that job in these small relatively remote towns. 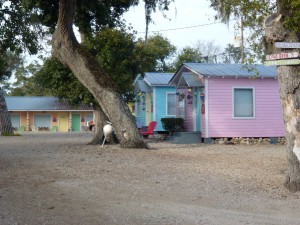 We ended the day the same way we started the day – eating. We brought chips and cheese over to It’ll Be Alright and had nacho and movie night. A relaxing way to end our second day in Steinhatchee, Florida. 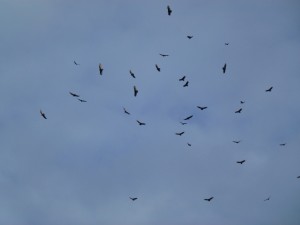