Stop to Stop: Stop before Roger’s Pass to campsite 15 miles from Ovando

First Things First: First town with a 4-wheeler trail right through town (Lincoln); First time hanging food bag to keep bears away; First crossing of continental divide (not including one I passed near Fargo). 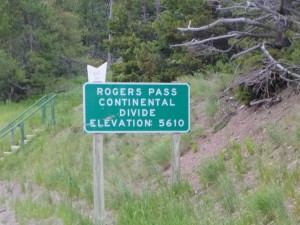 Mile to Mile: close your eyes. Can you smell it? I’m talking about the smell of ponderosa pine. I’m surrounded by it and it’s real – not the stuff hanging in your car. I love it! 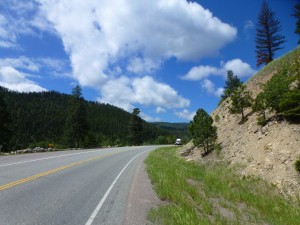 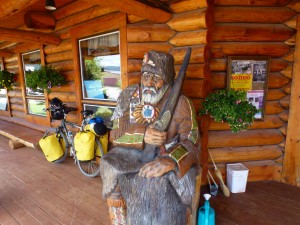 The day started a little sketchy. Temps were around 38 degrees and low clouds/fog blocked the sun and gave the cold air a clammy feeling. I was cold in my sleeping bag too so I just decided to get up and start pedaling. I’m glad I stopped where I did. The big climb – about 4 + miles at 6 mph began minutes after I left camp. I was cold and sweaty at the same time. Pedaling made me warm but the cold wind sucked the warmth away instantly. I just kept pedaling. I finally made it to the top of the pass and chatted with Holly (hi Holly) who was going to hike one of the peaks at the top of the pass. We had a fun chat (hope you added another peak to your list and the sun came out just as you reached the top) and she started up while I flew down…and down…and down. Basically, except for a couple easy climbs, all the way into Lincoln – somewhere around 12-14 miles!. I was cold but exhilarated from the early morning ride and quickly found a place to do laundry 2 minutes from a buffet breakfast and one minute from the grocery store. When they aren’t dying a slow death, small towns can be amazing. 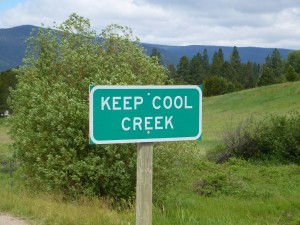 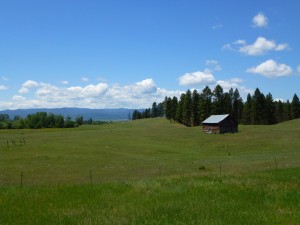 After finishing my various tasks, I headed down the road toward Ovando, literally. The road I am on follows the course of the riiver so, except for a few minor bumps up, I just flew. It didn’t hurt that I had a nice 7-10 mph tailwind most of the time. A little too much Sunday traffic but I kept my head down and pedaled. 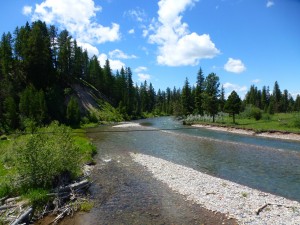 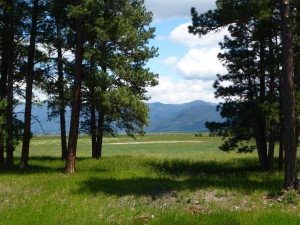 I had wanted to stay in Ovando – the little museum there let’s visitors camp on its grounds for free. It’s trying hard to get tourists off the main drag to spend a little time wandering around. I visited with a couple people in the shops and museum, had a snack and agonized over should I stay or should I go. Given that I still had an amazing tail wind and the volunteer at the museum said there were camping options about 15 miles down the way made the decision easy. 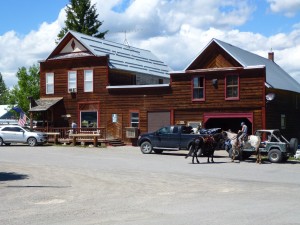 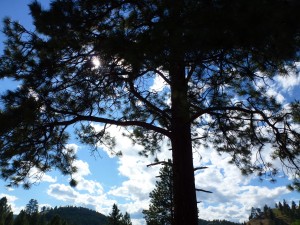 The last 15 miles zipped by and I found a gravel road leading to some campsites along the river. Lucky it’s Sunday afternoon. I found one of the best campsites I’ve ever stayed at (ever) only 10 minutes in on a rough gravel road. As I write this I am overlooking at a scenic meadow across a lazy blue river surrounded by ponderosa pine trees. I guess in the winter, the elk come down along here in big groups to rest and hang out. Pretty cool way to end another incredible day. 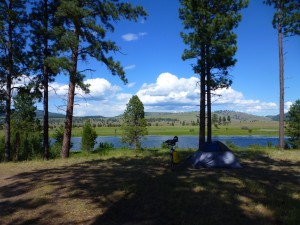 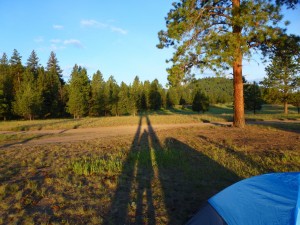